It has been about four months since the October 2020 events in Kyrgyzstan, and there's a new president already in office.

During the three months between the political destabilization of October 5 and the January 10 elections, controversial events occurred in the country that still raise questions among the public and have a legal aspect. In this regard, we have collected a number of the most controversial facts left unexplained and presented them chronologically. These events are related to the persona of Sadyr Japarov as the new head of state.

How it all started

On the night of October 5th to 6th: ex-MP Sadyr Japarov, who was sentenced to 11.5 years in a colony with a reinforced regime in 2018 and was in custody, was released by demonstrators. He immediately headed to the square, where he gave a speech in front of the protesters. He does have strong support from a large number of supporters. This is evident from the reaction of the crowd, chanting his name.

The position of head of government

October 6: The very next day, at an extraordinary emergency meeting of MPs of the 6th Convocation at the Dostuk Hotel, Japarov was appointed acting prime minister for the first time. At that point, nothing had been fully resolved. Procedural rules and laws were violated, as stated by deputies, lawyers and human rights activists.

In the days that followed, a struggle broke out between the two main contenders for the seat of head of government - Sadyr Japarov and Tilek Toktogaziev. 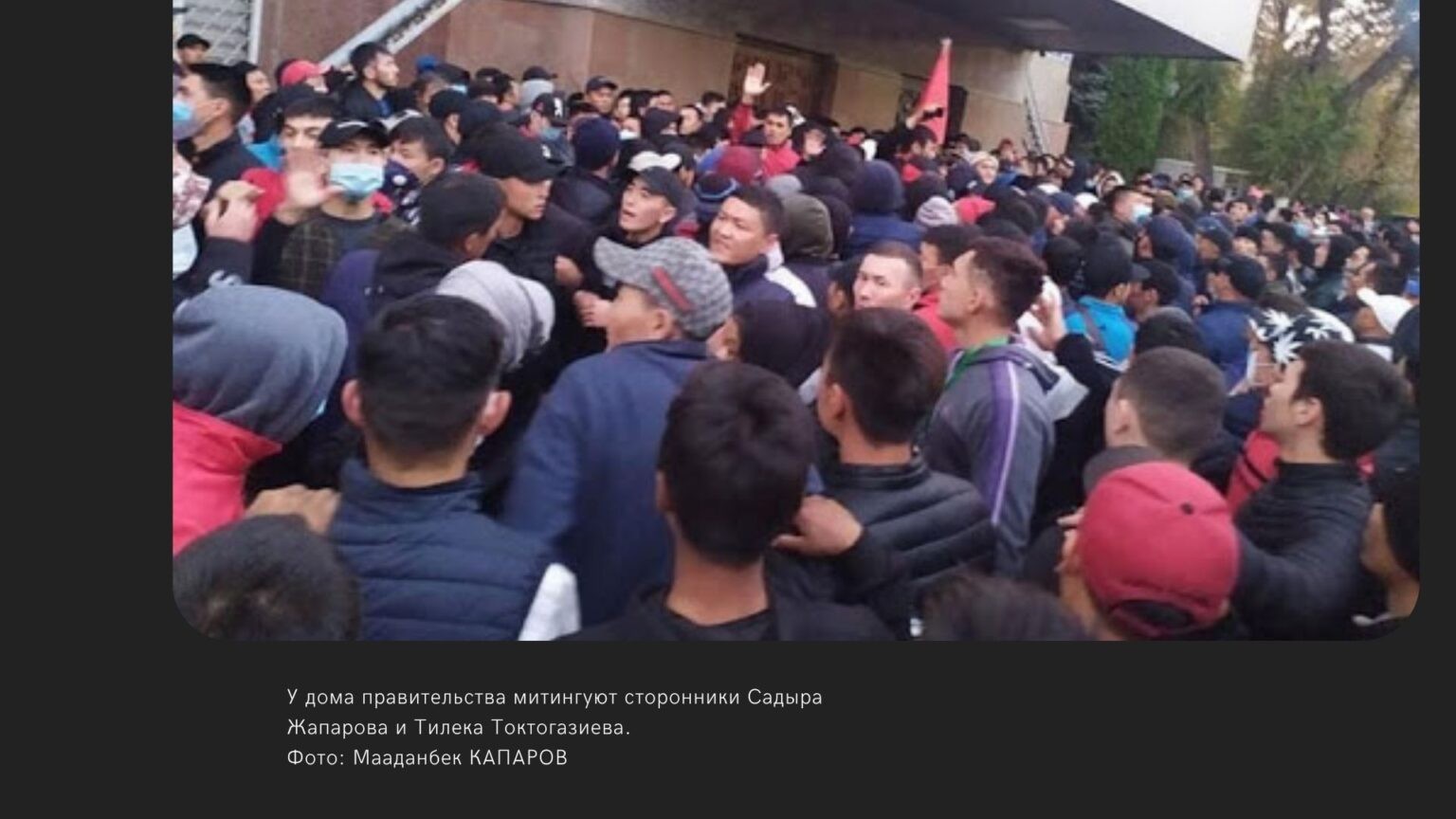 October 10: Deputies gather again for an extraordinary meeting, but this time at the Ala Archa State Residence, to vote once again for Japarov to head the government. Parliamentarians once again approved the composition of his government.

Later, however, some deputies reiterated a number of violations of regulations, the lack of a quorum and the pressure, and the meeting itself was declared invalid. This was also stated by the lawyers. Later, former President Sooronbay Jeenbekov ruled the appointment illegitimate and returned the document to parliament.

The question remained about the fact that the Supreme Court of Kyrgyzstan acquitted him on charges of attempted violent seizure of power in 2012 only on October 16.

November 14: Sadyr Japarov resigns as acting head of government and president to run in elections.

What kind of candidate was Sadyr Japarov?

Throughout the whole campaign period, the mass media have published occasional news about violations, and statements by lawyers and politicians. Economist.kg collected the most significant of them.

Registration of the candidate: as stated by CEC members Gulnara Dzhurabaeva and Adilet Satygulov "Japarov ignored the requirement of the constitutional law "On Elections of the President of the Kyrgyz Republic and Deputies of the Jogorku Kenesh of the Kyrgyz Republic",  stipulating that early presidential elections must be scheduled or considered to be scheduled no later than 7 days after the resignation of the current president, that is no later than October 23, 2020. Thus, as head of government acting as head of state, he had no right to run for president, and the Central Election Commission should have refused to register his candidacy. Nevertheless, on December 14, 2020, the CEC registered Japarov as a candidate.

It should be noted that not only CEC members expressed their position regarding Japarov's nomination as a candidate for head of state. His decision to run in the election, and his registration caused discontent among a number of individual contenders for the position of head of state.

Three candidates: Adakhan Madumarov, Kanatbek Isaev, and Bektur Asanov applied to the CEC with a statement asking to deny registration to S. Japarov, citing the fact that he was the acting President of KR and that he had not resigned but only suspended the powers of the Prime Minister of the country. However, the CEC decision dismissed these claims, and the decision was upheld by the court of original jurisdiction and the court of cassation, which allowed the candidate to participate in the election.

Election fund: According to the law on the election fund, there are really no additional requirements for candidates to ensure the transparency of their own contribution. There is only one condition: the contribution must not exceed the calculation index by more than 150,000 times. In this part there were no violations on the part of the candidate.

However, since there was a statement regarding the 15 million soms contributed by him that these were the "pensioner's funds", it still remains unclear how these funds were collected, who was their collector, and whether they were documented in accounting documents. This was also stated by Dzhurabaeva and Satygulov.

"Analysis of the financing of candidates' election campaigns has shown that the lack of a universal declaration of income and expenditures of the population creates a number of obstacles in the monitoring of candidates' finances. The existing system does not allow to trace the sources of funds of persons who contribute to the candidates' election funds. In addition, the changes made in November 2020 to the Election Law to permit the free provision of services by canvassers and candidate representatives contradict other parts of the law."

Conditions for campaigning: Japarov had a large financial advantage over the other candidates. There is a high probability that in such a short period of time other candidates did not have enough time to prepare properly for the campaign. 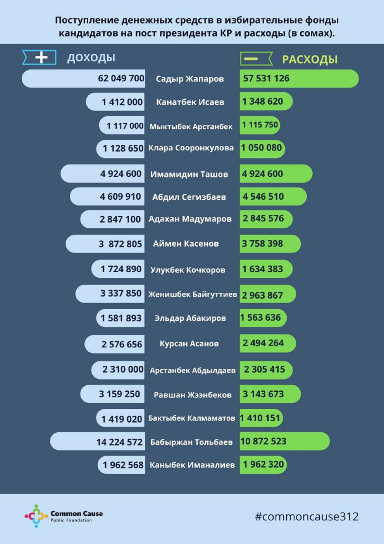 In terms of administrative resources: Video and audio materials were posted on the Internet and in messengers, and the CEC received complaints that the executives in the regions (Tokmak, Kara-Suu, Kara-Kul) forced their employees to participate in campaign events.

State guards at meetings with voters: The question remained about the participation of state guards at Japarov's meetings with voters. In the video from the campaign meeting in Talas oblast, Internet users spotted representatives of the State Guard, and journalists managed to prove that Japarov was indeed still accompanied by employees of the 9th department of the SCNS. The issue was not that Japarov was being guarded, but that the state guards were wearing vests and hats with the inscription: "SADYR President". This directly constitutes campaigning on the part of government officials and the use of administrative resources. 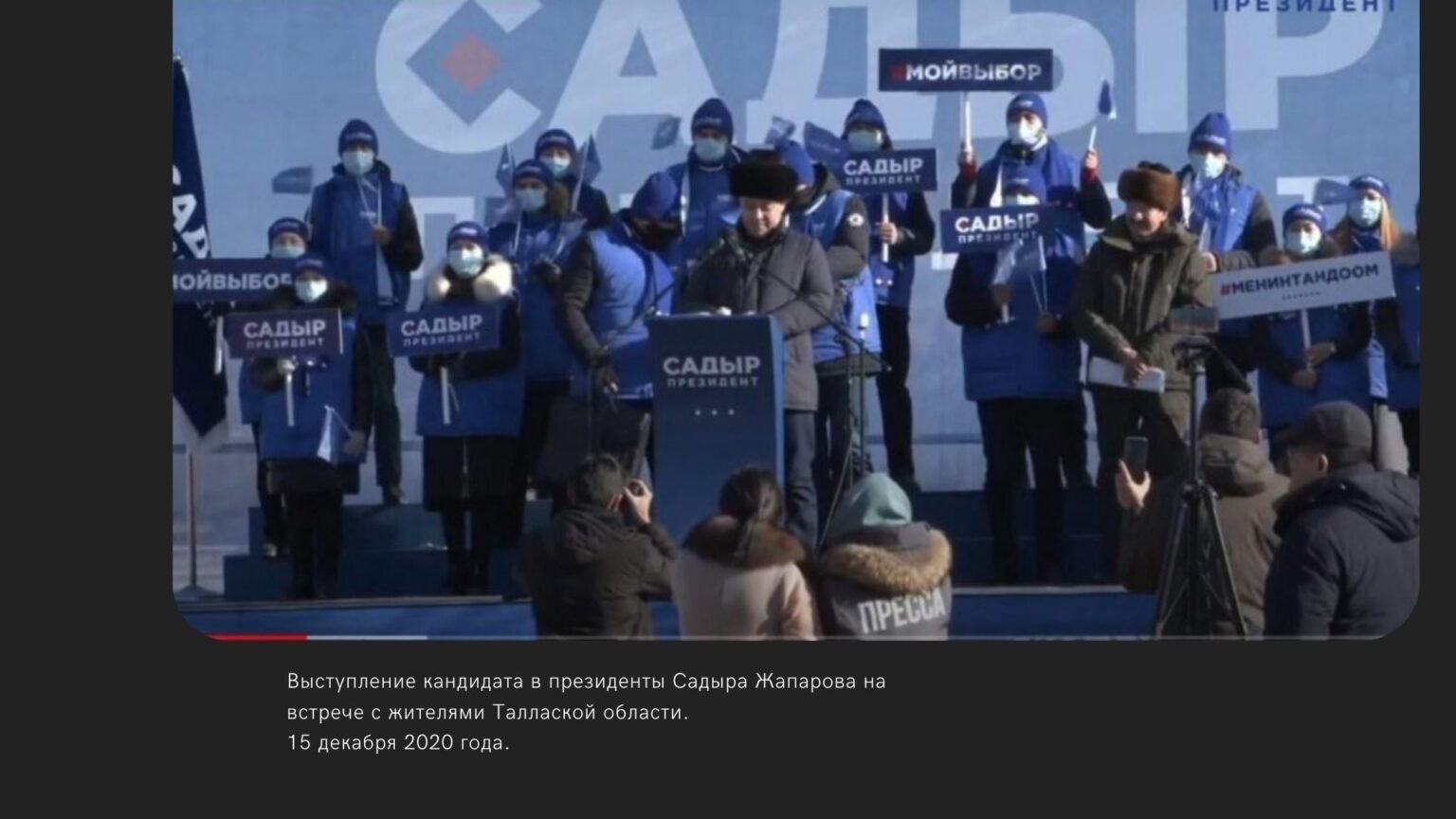 Alexandr Moschin, a spokesman for the candidate, explained the incident this way: they are ordinary security guards of Sadyr Japarov, they have "toy guns and suitcases with letters of voters" (referring to the state guard bags, which are used as armor in case of danger).

The Common Cause Public Foundation, which trained over 700 long-term and short-term observers for the early presidential election, sent information about 86 identified violations during the pre-election period.

79% of all these violations concern Sadyr Japarov:

As a result, information on 22 violations was sent to the CEC Rapid Response Coordination Group (RRCG).

Cases of possible abuse of administrative resources also relate to actions in favor of Japarov (nine out of ten).

There were recorded facts involving the use of social networks: information about a meeting with a candidate was published on the Facebook page of an employee of the Kochkor District Department of the Ministry of Finance. Under the law, public officials cannot act as organizers of election events and can't campaign for certain candidates.

Alleged vote-buying: Four of the five cases of vote-buying referred to the RRCG involve actions in favor of presidential candidate Sadyr Japarov.

In two cases, representatives of local authorities promised local residents to provide remuneration for voting for Japarov and demanded copies of citizens' passports, which is a serious violation of electoral legislation.

Influence through media and social networks

New Year's greetings from "not yet president": Traditionally, Kyrgyzstanis are greeted on New Year's Eve by the president of the country. Then presidential candidate Sadyr Japarov congratulated his countrymen on the coming year 2021 on December 31 at 21:00 on the PBC public television channel. 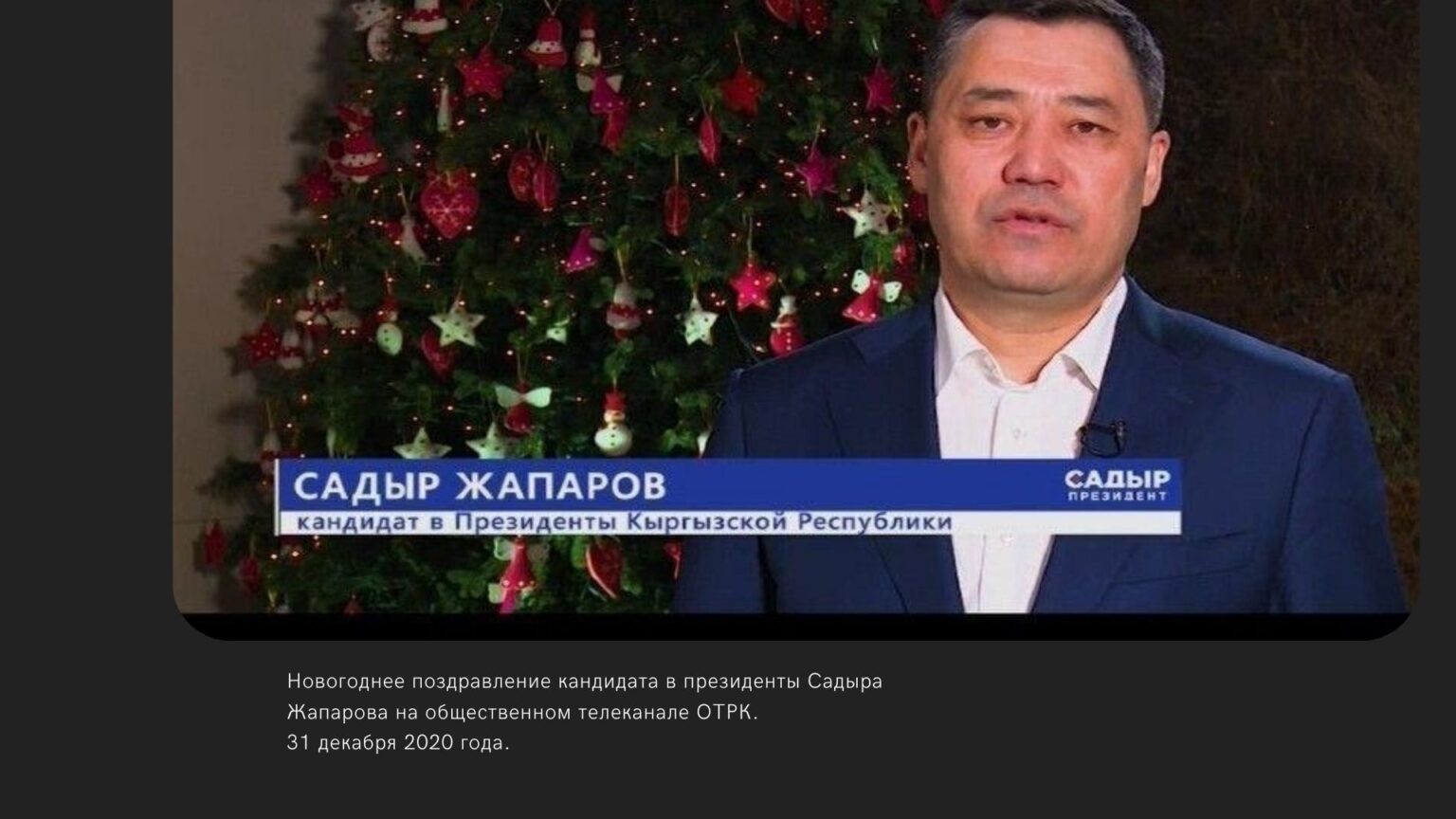 The TV channel's advertising and commercial department told Kloop.kg journalists that Japarov's speech "was not posted through them". However, Alexandr Moschin, the candidate's spokesman for the election, said that the speech was aired on the channel on the basis of an advertising contract.

How the greetings got on the state TV channel remains unclear.

Removal of TV debates: Sadyr Japarov refused to participate in TV debates with other candidates. However, he was actively discussed on the air, for example the former head of SCNS Abdil Segizbaev claimed that Japarov was connected to the family of former president Kurmanbek Bakiev. He demonstrated photos on the air, featuring Japarov taking part in the Bakievs' toi (feast).

Moreover, due to the failure of the now-elected president to appear at the debate, his opponents did not receive answers to questions about:

The debate sparked a lively public discussion, but the video was removed from the PBC Youtube channel. It was later restored.

Japarov or Matraimov: Troll Factory: Kloop.kg and Kaktus Media journalists analyzed approximately 800 fake accounts on Facebook social network and found out how fake farms work. It turned out that anonymous people and fakes who defended the "Mekenim Kyrgyzstan" party started to create the appearance of Sadyr Japarov's positive popularity on the Internet.

When examining some of the profiles of the fakes supporting Japarov, it turned out that just one day before the protests in October, they were supporting "Mekenim Kyrgyzstan": 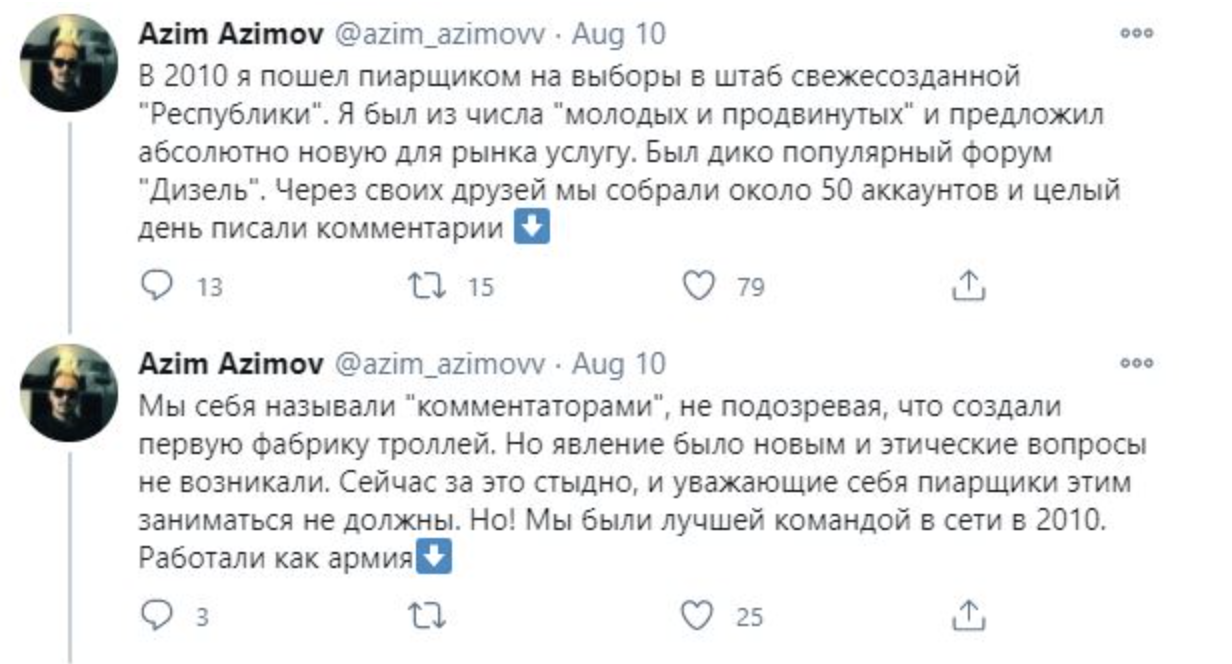 Political analyst Azim Azimov confirmed that such a mechanism for manipulating public opinion has been used in Kyrgyzstan since 2010.

Journalists provide the example of the fake profile of "Aya Ryzykov", who was active under the posts of Mekenim Kyrgyzstan's parliamentary candidate Elnura Alkanova. However, after the events of October 6, this account switched to support Sadyr Japarov, who came to power. Currently, the "Aya Ryzykova" profile no longer exists. 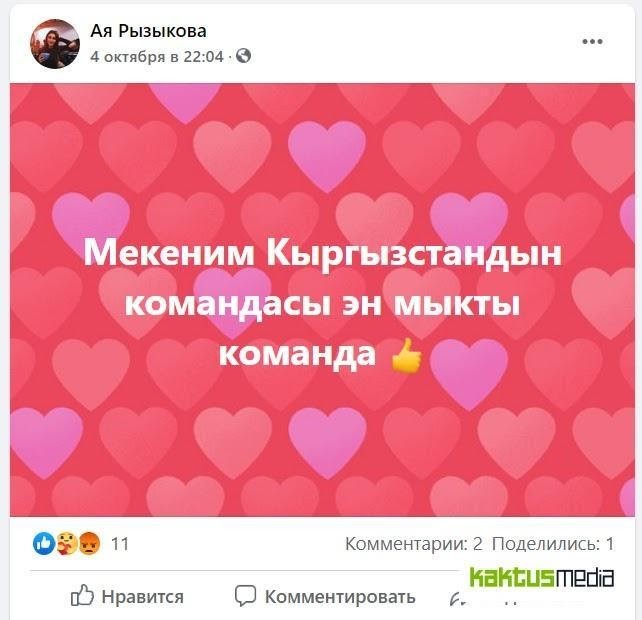 The editorial team found several nonpartisan observers who had been threatened or pressured. The interviewee from Kara-Suu District, Osh Province, told that law enforcement officials forced him to write denials of his own statements about violations. 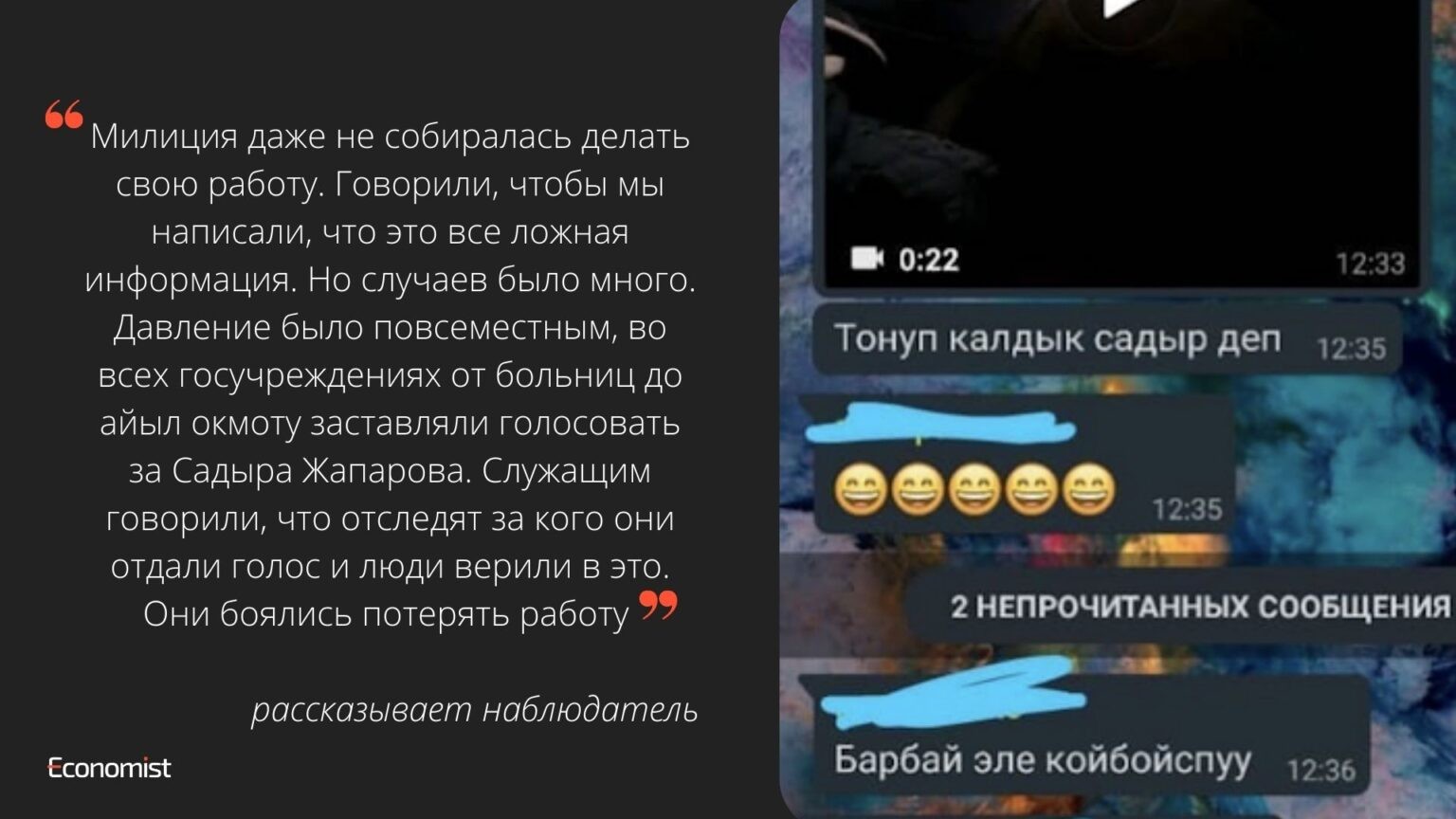 In addition, the observer told about a case where the acting principal of school No. 82 in the village of Kashgar-Kyshtak forced parents of first-graders to go to a meeting with the candidate. The action took place in the parents' group in WhatsApp.

"My parents sent me screenshots. When all this became known to the public, the principal gathered the teachers to find out who "ratted" them out. All of this was accompanied by foul language," the observer said 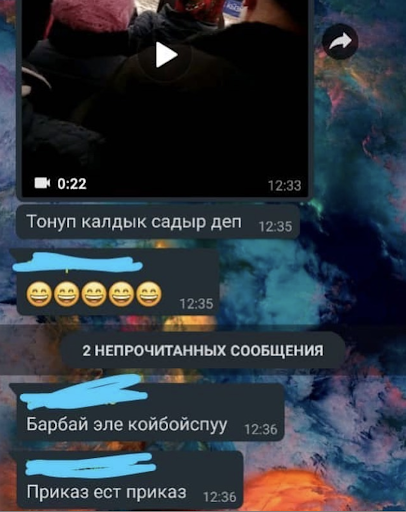 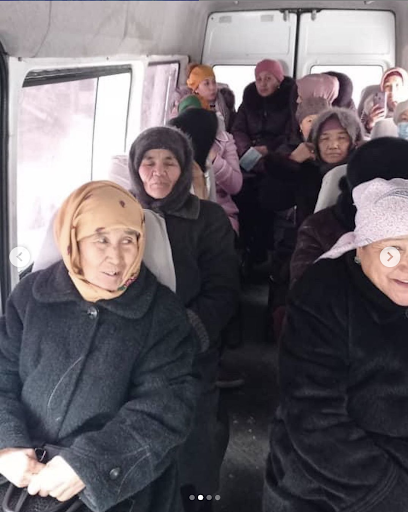 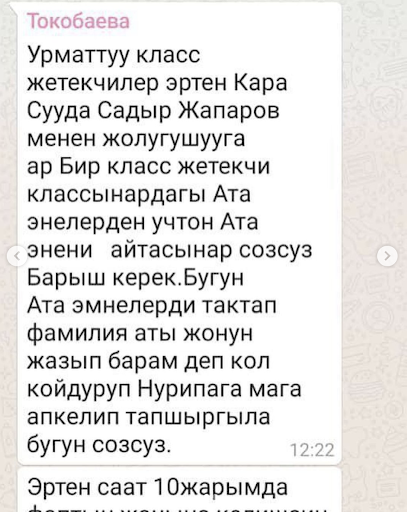 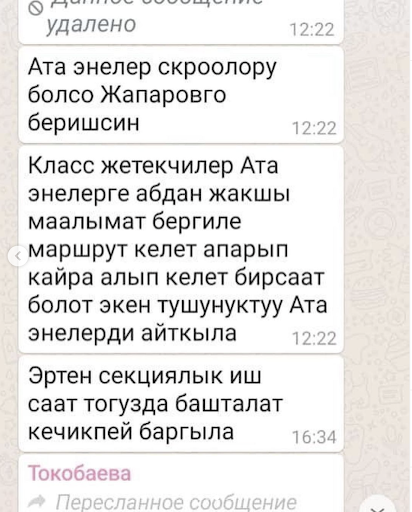 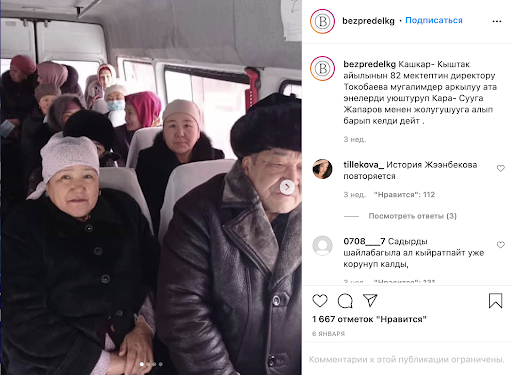 According to his claims, the police did not accept the statements, and all the agencies "covered for each other," saying that there were no violations.

At other polling stations there were also recorded cases of pressure via administrative resources in favor of another candidate. In most of these cases, Sadyr Japarov was promoted, the observer concluded.

In the Ton district of Issyk-Kul oblast, another observer told the editorial team that the secrecy of ballot was violated. 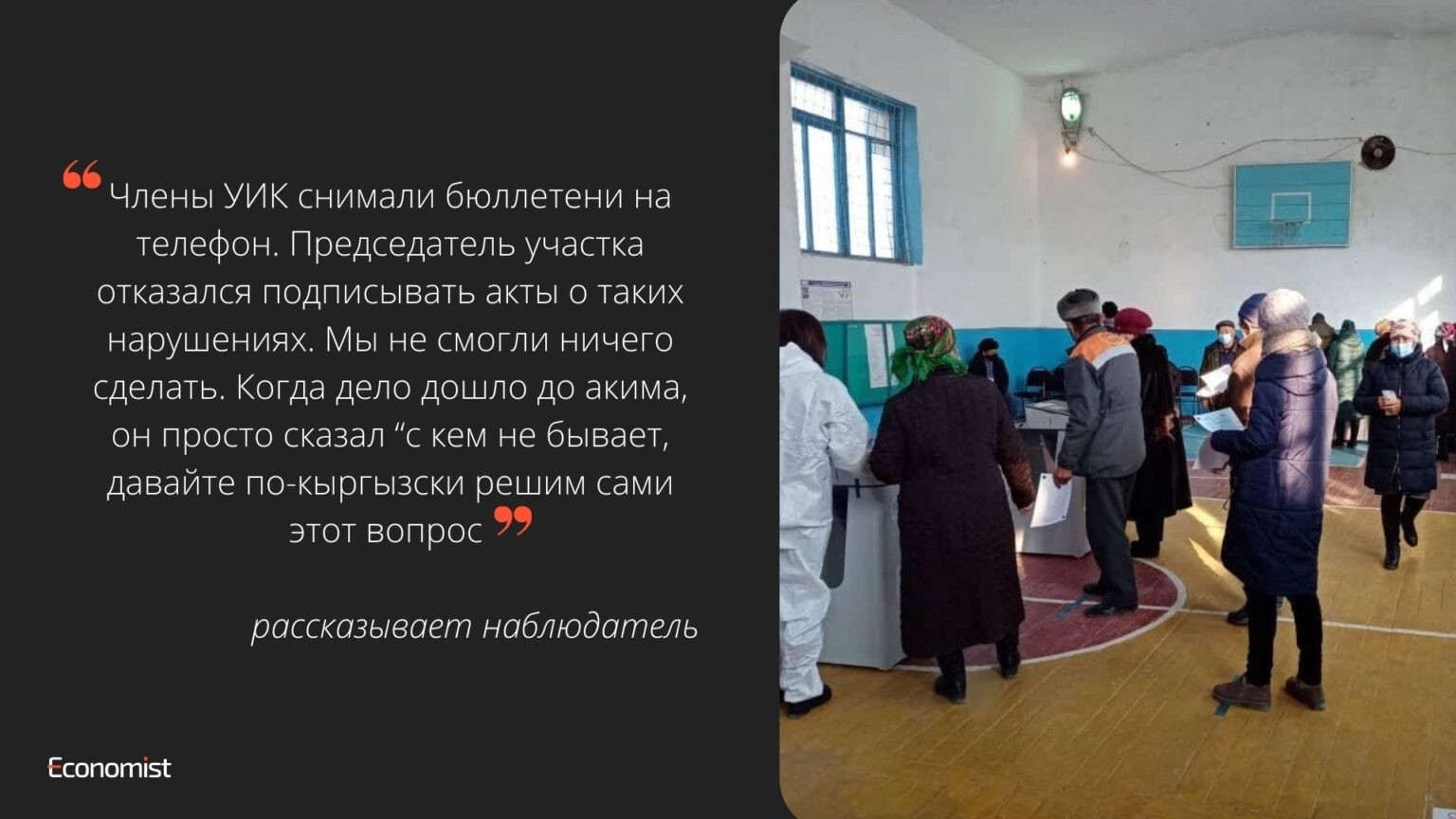 The observer added that one of the LSG employees was agitating his fellow villagers for Sadyr Japarov.

January 10: more than 79% of voters voted for the candidacy of Sadyr Japarov, with a voter turnout of about 40%.

The Economist.kg editorial team does not aim to accuse anyone. This material chronologically and factually presents the events and opinions, all of which were openly reported in the media during the specified period. The editorial team intentionally does not make any deductions and conclusions, however, in the context of its journalistic activities, considers it necessary to cover these facts and the remaining unanswered questions.

The material was prepared with the assistance of the Common Cause Public Foundation. The editorial team thanks the Foundation for providing information on the nonpartisan observation of the early presidential election in the Kyrgyz Republic.